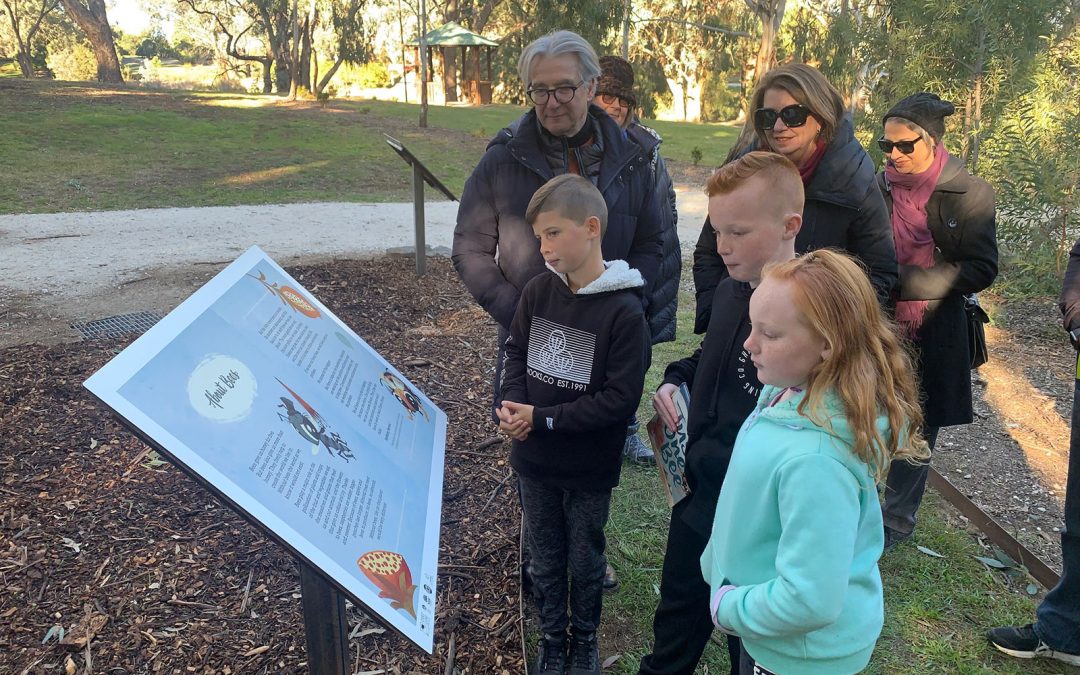 Just One Bee: How a book became a story walk

Margrete Lamond, Dirt Lane Press’ publisher, had the idea. “Wouldn’t it be lovely if we could produce the double page spreads of the book on boards and have them in a garden and children read them in the garden setting.”
Margrete had previously heard of another writer having a books pages enlarged and presented in a garden setting so asked the assistance of Lisa Sharkey who was working on the book launches of Just One Bee in both Orange and Sydney.
The first step was to approach Orange Botanic Gardens to propose the idea. They enthusiastically responded. So one Sunday the team met with the Botanic Gardens, Head Gardeners Lyn Gough and Neil Bollinger to seek out the best location.
The Gardens agreed to provide the stands and Lisa researched and obtained quotes for the best reproduction method and material so that the artwork would withstand both time and weather.
Next the idea had to be funded. Successful applications were made for an Arts Restart Micro Grant from Arts Out West and to Orange Regional Arts Foundation.
So, in May 2021. graphic designer Hannah Jantzen amended the files to incorporate a border and acknowledge the sponsors. Tim & Lynn Winters and Lisa met with the head gardener Neil Bollinger at the Gardens to mark out the placement of the stands. The panels arrived from the printers and were laid out in Tim Winters’ studio where heavy duty, weatherproof, double-sided tape was applied to the backs of each of them.
When Neil informed the team that the stands were in place Tim and Lisa, dodging rainy weather, cleaned each panel with isopropyl and peeled the tape surface off. The twenty sticky panels were carefully placed onto the stands, pressing intently for a minute or so,  and ten of the panels were installed. Two days later the final panels were installed.
Back in Stuart Town Lynn and Lisa made honey cakes and prepared for the launch.